He made the Pleiades and Orion;
He turns the shadow of death into morning. – Amos 5:8

Last week I had an off day. A few of them, actually; just feeling lost, disconnected, and weak from an internal spiritual battle. (which really, is just a form of the original one) On this particular day, I could barely do anything. And then in the evening, I couldn’t sleep. We just finished building a deck on our small cabin, so in the middle of the night I got up, and walked out onto it.

What an incredible night sky greeted me! It was sparkling with a gazillion stars, and the Milky Way was quite clear, as well as Orion’s belt and his bow right in the center of my view. And the temperature and moonlight was so perfect, that I just had to grab a light blanket and lay down on some cushions.

How quickly God comes to us when we draw near! “Draw near to God, and He will draw near to you.⁠1” Gazing deeply into the expanse above, the Creator began to speak comfort to this troubled heart. “I will take care of you;” He whispered, “you have a place in me. And I know you by name.“

I was feeling less lost already! :-)

It then became surreal, when I realized I was seeing stars in the same sky that Abraham saw long ago, and in the same pattern when God gave him a promise of children “as many as the stars in the sky!” ⁠2 How interesting, that in an ever changing world, there still are “signs” 10 in the sky that haven’t changed after thousands of years.

However, Father reminded me about “fallen stars,” and the tragedy of that state. And also the danger of “wandering stars” too! (Jude 1:13)

Now, what a literal “wandering star” is exactly, I’m not sure, but whether “cast about,” or “cast down,” there is comfort knowing that our spiritual rebirth and God’s persevering love is the balance that our life hangs on. There are some stars that move, or die, but God’s children are seated with Him forever.

Because of his great love for us…God raised us up with Christ, and seated us with Him in heavenly places…in order that in the coming ages he might show the incomparable riches of his grace… Ephesians 2:4-7. Also see Philippians 2:15.

★ A Family in the Stars 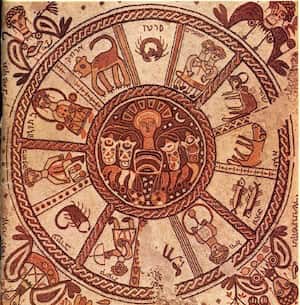 If that’s not enough good news – there’s more. The Spirit also reminded me that we are not born anew and then placed just anywhere in God’s creation. Not at all. God places us into a spiritualfamily ⁠3 — and not unlike a family of stars! Star groups, that form pictures, have been signs in the sky since the beginning of time. Ancient peoples used these pictures, (especially the twelve signs of the zodiac, or as the Bible calls the “Mazzaroth” ⁠4,5) to plan crops, navigate at sea, and to know what day, month, and year it was. But it’s the storybehind the pictures that was the talk around the water hole. Constellations like Virgo (the virgin and child), Draco (the dragon), Leo (the lion, standing on Hydra the serpent), and many others⁠5 — have been together, without using speech or words, communicating the timeless message of God’s redemption plan to curious hearts.

Now if this is a new thought to you, I’m not talking star worship or prognostication here. I am talking about people from the beginning of time having a “connect-the-dot” storybook in the sky that is rooted in the Good News. ⁹

Of course over time, people have corrupted the purpose of the stars (see Isaiah 47.13) to obtain knowledge and control outside of an intimate relationship with the Creator. And some of the signs have been changed, and many others added.5 But this is only evidence that the original design was of God’s doing, not people’s imaginations.

God alone stretches out the heavens and treads on the waves of the sea. He is the Maker of the Bear and Orion, of the Pleiades and the constellations of the south. He does great things beyond searching out, and wonders without number. Job 9:9.

Can you bind the cluster of the Pleiades, or loose the belt of Orion? Can you bring out the Mazzaroth in its season? Do you know the ordinances of the heavens?  Job 38:31-33.

The heavens declare the glory of God, and the sky shows His creative work. Day after day and night after night they pour forth speech and knowledge without words…  Psalm 19:1.

★ The Bride in the Stars

Now, up to this point I wasn’t thinking about the Song of Songs. To my recollection there wasn’t any mention of stars in the book. Except for something close:

Who is this that appears like the dawn, fair as the moon, bright as the sun, and majestic as an army with banners?  – Song of Songs 6:10 [referring to the Bride]

I guess I never questioned the term “army with banners,” in how that relates to all the sky-located metaphors that came before.

But then recently, I was surprised to read the verse in a different translation.⁠6 Instead of “army with banners,” it has: “stars in procession!”

Now, while these two versions seem so different from each other, I have a hunch. In short, (leaving most of the study for another post) a connection could be in something I read before: ⁠9 that each of the twelve tribes of Israel marched through the wilderness carrying a banner (Numbers 2:2) with an ensign of their assigned star constellation. ⁠7, 9 Especially when traveling and setting up camp, tribal banners (or flags) were helpful in maintaining order, and knowing who you belonged to, if ever getting lost in the crowd.

By the time all this unfolded, I definitely did not feel lost anymore. :-) I felt hovered over by a great “cloud of witnesses⁠8” who have gone on before; with a few of them more closely linked together with me in God’s plan. Being shown (in the types and figures of the stars) that the Bride is a heavenly light in the darkness, and all her members are linked together to show forth a story — was an encouragement that has lingered long.

So fear not! In the midst of all the recent earth-quaking events — look up! As long as the universe’s clock keeps ticking, there is comfort and purpose in seeing your life raised with Christ in heavenly places.

And He knows you there by name!

Let there be lights in the firmament of the heavens [that includes the stars]
to divide the day from the night, and let them be for signs and seasons, Genesis 1:14.

Behold, I and the children whom the LORD hath given me shall be for signs, Isaiah 8:18.

From one man he made every nation of men, that they should inhabit the whole earth; and he determined the times set for them and the exact places where they should live,  Acts 17:24-30

1 James 4:8 / 2 Genesis 15:5 / 3 Psalm 68:6 / 4 Job 38:31-33 /  5 There are 88 currently recognized constellations, although some were added over time, and few entirely changed. The original ones, however, (probably just 36) have a deeply rooted history, and in fact zodiacs (featuring 12 main constellations, most of which have remain unchanged) are the earliest historical records and relics ever found, going back to the Mesopotamia area where Eden was first located. / 6 Both NIV and NET translate Song 6:10 as “stars.” / 7 https://www.biblaridion.info/Digressions/zodiac.pdf / 8 Hebrews 12:1 / ⁹ For more information see the classic works: Gospel In The Stars by Joseph Augustus Seiss 1884 and The Witness of the Stars by Ethelbert William Bullinger